Well we have arrived at a new decade and the pictures for this month are from over a century ago!
​
Soon after the opening of the CK&S Railroad in 1887 John Acker decided to start harvesting ice from Long Lake. He hired local farmers who had little to do in the winter months. The harvesting of ice was a common cash crop in the northern states and had been so for many years. In fact, President Thomas Jefferson harvested ice to keep his foods cool throughout the summer months. Harvested ice was used mainly to preserve foodstuffs instead of canning or drying which was more time consuming.
​
To harvest ice, it first was necessary to create it by “Mother Nature”. The water of the lake must cool down far enough for it to freeze. As water cools it become most dense at about 34 degrees. It then sinks to the bottom and warmer water rises to the surface. So, theoretically the entire lake from top to bottom must be at 34 degrees before the top water can cool further to form ice. When the first ice forms then it thickens as the temperature of the air meets with the surface of the ice. If it snows the snow insulates the ice keeping the colder air from the ice. So logically if the snow was scraped away the ice would thicken faster. And horses with scrapers would then be used to plow the surface of the lake so the ice would thicken faster. But first the ice would need to be thick enough to support the weight of the “Ice Crew”.
​
Once the ice was thick enough horses would drag an ice plow, essentially a knife blade across the ice to cut into it. The blade would cut about 1 inch deep. A grid was created so ice could be cut in blocks and moved through a channel to the incline at the shoreline. The workers would use a one man saw to cut the ice lengthwise.  This would then have to be cut and broken crosswise into blocks that could be handled. The chunks of ice could weigh up to one hundred pounds depending on how thick it was.
​ 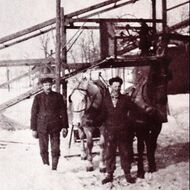 ​Workers in the icehouse or the train car would pick up the blocks and stack them to the ceiling. There were two men in the train car, and they would alternate picking up blocks. It was a game for them to steal the other guys turn so he would fill his end of the car to the door opening first. The guy who finished his half last would be responsible to fill in the rest of the car and then close the door.
​
Sawdust was used to insulate the blocks and keep them from freezing together. The CK&S train cars were taken to Kalamazoo and the ice was stored at the Kalamazoo Ice and Fuel Company or shipped further to Chicago or other points south. Then through the summer ice was delivered around town by drivers to residents for use in their iceboxes. In 1884 it was estimated that 85% of households had iceboxes. It wasn’t until the mid-1930’s that the refrigerator was capable of making ice. And many households used iceboxes into the middle of the century!
​
This video shows how the ice was cut and moved and some of the tools that were used.
The Long Lake-Cloverdale Association is a 501(c)(3) Non-Profit Organization - All Rights Reserved
Long-Lake.org