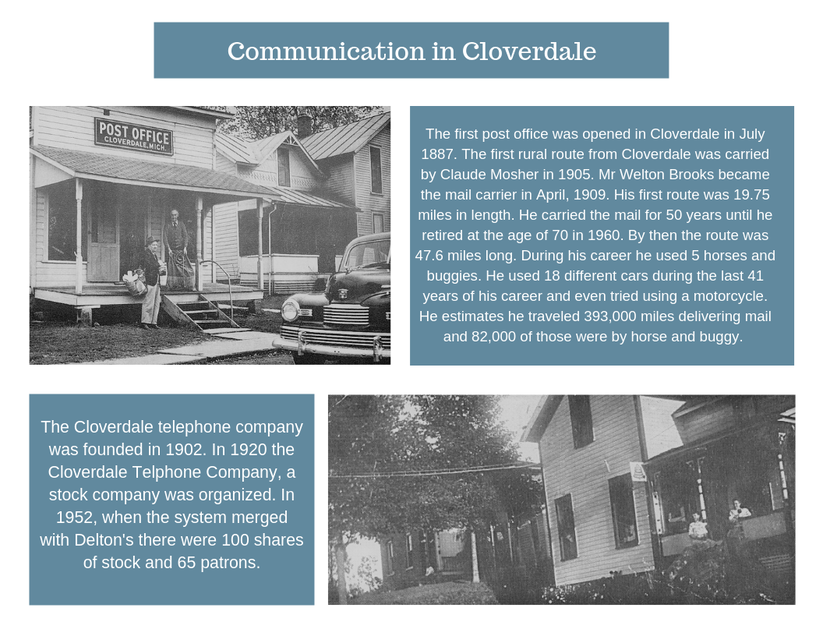 As the population of the area grew, it also increased the desire and need for communication. When the railroad was completed that connected Kalamazoo to the north, the main means of communication was by mail and the railroad telegraph.

After the post office was moved to Cloverdale in 1887 people used the U.S. Mail service more frequently. As the volume of mail increased, the location of the Post Office moved, using two stores, one of the hotels, the meat market and finally the cement block building in the picture below in 1951.  The building still exists today. Someone remodeled it and turned it into a garage.

​
Welton Brooks, the mail carrier from 1909 to 1959 is my grandfather and I remember riding with him on his mail route in the early 1950’s. What I do not recall is where in the car I rode! If he drove as today’s carriers do today, he would have been in the passenger seat and the back seat would have been full of mail. I do recall that we went home for lunch before he finished the route in the afternoon!

One story I remember about him was that he once got stranded in Shultz by a snowstorm and walked home to Cloverdale along the ridges of the hills where the snow was not as deep! One day early in his carrier he was driving along a dirt road when he met a Stanley Steamer. It frightened his horse, which upset his buggy and spilled all the mail into the road. The mail ran a little late that day!

The words "Neither snow nor rain nor heat nor gloom of night stays these couriers from the swift completion of their appointed rounds" have long been associated with the American postal worker. 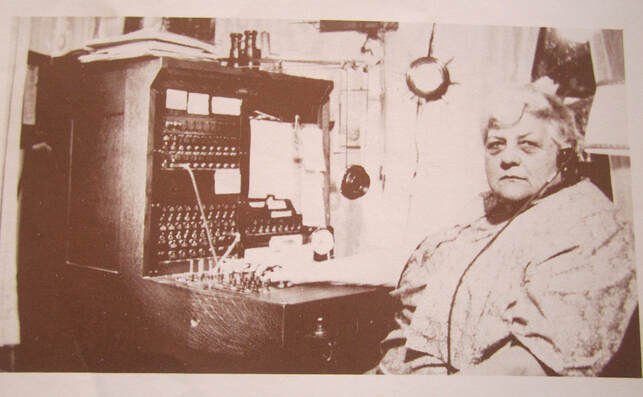 The telephone company was started in 1902. It has had several different names during it's lifetime. Phones were primarily used to  connect business owner's homes with their businesses. Establishing the telephone system required a few wealthy residents to purchase poles and lines for the switchboard. Everyone had to purchase their own telephones.

An operator had to be at the switchboard to connect callers. So if an operator was not available, you could not make a call. I suspect there were not many calls made in the middle of the night.

Pictured above is one of the early operators, Leonore Waugh, at the switchboard.
The Long Lake-Cloverdale Association is a 501(c)(3) Non-Profit Organization - All Rights Reserved
Long-Lake.org