​In 1854 Ansel Kingsbury purchased 57 acres of heavily wooded land which is now Cloverdale and the land between Cloverdale and Long Lake. The taxes he paid for 1872 were $31.32. Boy times have changed! 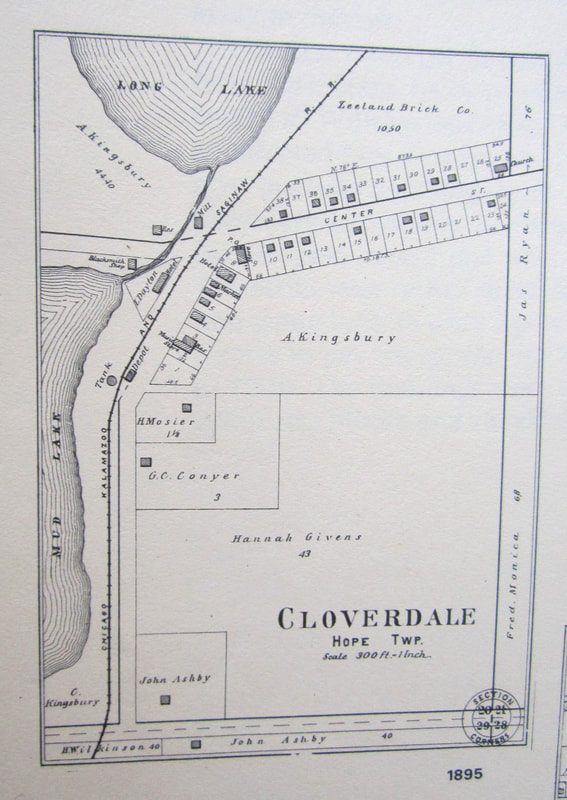 ​The village of Cloverdale plat shown here, dated 1895, reveals the location of some of the first buildings. If you look closely you will see that there were 38 numbered lots.  Ansel Kingsbury built a sawmill soon after he purchased the land which was powered by water moving from Cloverdale Lake to Long Lake which was 16 feet lower than Cloverdale Lake.
​The plot shows the connecting mill race between Cloverdale and Long Lake with the sawmill on the north side. At the mill race entrance from Cloverdale lake was a blacksmith shop also built by Ansel Kingsbury. Notice that along the CK&S Railroad is 10.5 acres that was owned by the Zeeland Brick Company.  There was a brickyard on this property that made bricks from a large deposit of clay for about 15 years. If you look across the road from the present Cloverdale store you will see a big depression next to the CK&S Trail that was probably where the clay was removed to make bricks. The kiln for firing the bricks was located behind the present Post Office which is on lot 25. There is also a large depression in the land along Ackers Point drive across from the new red building that clay was probably also removed to make bricks from.
​According to old timers there were six houses, two stores, the town hall and the brick schoolhouse built from Cloverdale bricks in the village. And in addition, most of the brick buildings in Delton and many of those in Hastings were built using bricks made from brickyards in the area. The next time you drive through Cloverdale take notice of the brick buildings that still exist. They are probably 100+ years old!
​The brick house on the east side of M-43 between Acker’s Point Road and BJ Hydraulics was built with Cloverdale bricks. Another business that was in Cloverdale was an apple drier. During harvest time apples were peeled, dried, loaded abord the CK&S and shipped. Growing and harvesting potatoes was another income producer and a local farmer paid housewives $1.50 a day to dig potatoes. Then in the fall these women would row a boat up Long Lake after fixing breakfast to another farm and husk corn all day. Then they would row back down the lake to fix dinner.
​Cloverdale’s first doctor was located on lot 36. The remaining lots along main street, called Center Street, were eventually used for residents in the early 1900’s. 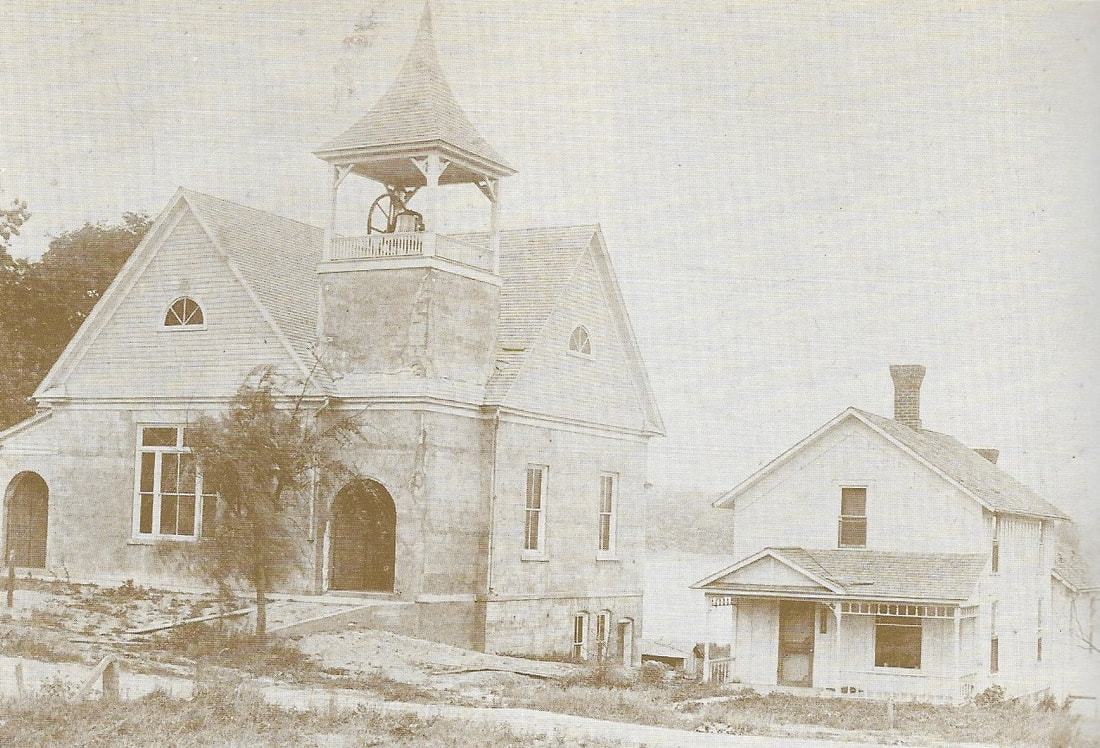 ​In 1897 John Ludwig bought the property west of Cloverdale and built the Cloverdale Mission which was dedicated by Mel Trotter who came down from Grand Rapids. By 1907 it was no longer used for religious purposes, but was still used for social functions. In the 1920’s and early 30’s it was used as a dance hall. It was dismantled and the 1700-pound bell was sold to a church in Kalamazoo. You can see Long Lake in the background and presently there are two houses in that location.
​When the CK&S Railroad ceased to exist in the middle 1930’s Cloverdale turned into a sleepy little town but held on and still exists today!
The Long Lake-Cloverdale Association is a 501(c)(3) Non-Profit Organization - All Rights Reserved
Long-Lake.org