History of the CKS Railroad - Part 1

This month we begin the story of the CK&S Railroad. It all began just after the end of the Civil War when it was thought that almost anyone could get rich from railroads. The waterways and stage coach routes were the means by which commerce was supported. Once the Transcontinental Railroad was completed in 1869 and the ability to connect all parts of the country was realized, there were thousands of miles of railroads completed in every direction across the USA. Many of these never even earned enough to pay the interest on the money used in their construction.

In December of 1871 a group of men from Kalamazoo, Hastings, Lowell and Greenville organized what was called the Kalamazoo, Lowell and Northern Michigan Railroad. It was planned to run from Kalamazoo to Smyrna just south of Greenville. After that it was proposed to run further north into the pine forests to transport wood construction materials to the populated south, including Chicago.

Remember the great Chicago fire of October 1871? There was a huge demand for wood after the city nearly completely burned to the ground. So it was felt there would be a large market there.  It was also thought that huge shipments of salt would be secured for the railroad.

The original plan was to build a narrow-gauge railroad. So, in 1872 work began to survey the route from Kalamazoo to Hastings. People along the route were very interested in the railroad and people in Plainwell offered to contribute substantially if the route were to include them. Kalamazoo was apportioned to raise $65,000 to finance the railroad. A report in 1873 showed that $5,079 had been spent so far to survey and obtain right of ways.

But then "The Panic of 1873" hit. It was a major recession that affected the entire country. More than 450 existing railroads across the country were sold and the effects of the panic lasted for six years. In the meantime, it was realized that a narrow-gauge railroad would not be profitable because all the freight would need to be unloaded and then reloaded onto standard gauge trains. Narrow gauge rails were 3 feet 6 inches apart and standard gauge rails were 4 feet 8 ½ inches apart. At this point nothing happened until 1883.

In June of 1883 two men offered to lay the tracks and operate the railroad if the people along the line would do their share by assisting in building the route. A solicitor from Detroit came to the area and convinced the businessmen along the route that they would profit by investing in the railroad. As a result, the original company was reorganized into The Chicago, Kalamazoo and Saginaw Railroad Company. Plainwell, Lowell and Smyrna were not included in the proposed route.
​
So after about twelve years of planning and replanning, the CK&S Railroad now begins to take shape. 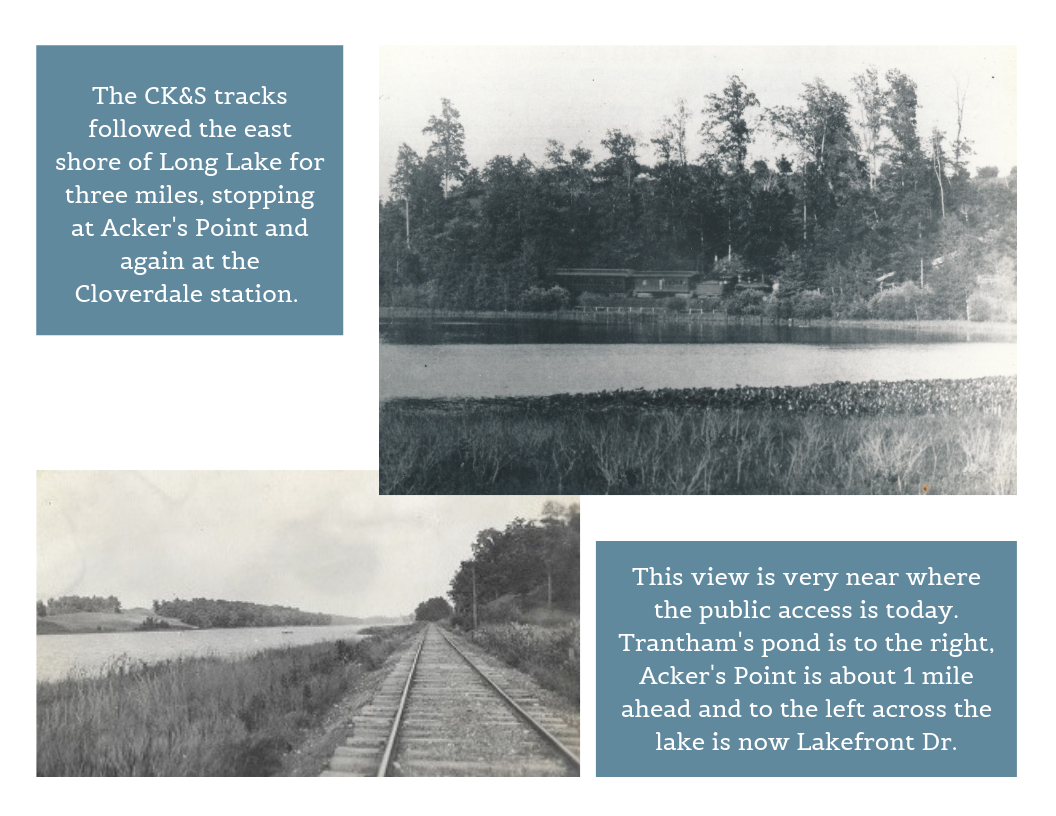 The Long Lake-Cloverdale Association is a 501(c)(3) Non-Profit Organization - All Rights Reserved
Long-Lake.org